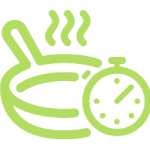 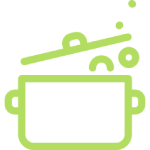 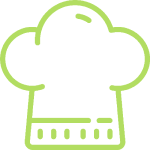 For the preparation of the dough

For the preparation of aloo stuffing

For preparing tandoori aloo paratha recipes you will think that we might need a tandoor or an oven to do so and that sometimes is not possible when preparing the item at home. But the recipe and technique discussed here are pretty simple and can be made easily at home.

For making this recipe the first thing you need is a pressure cooker that has its mouth opening outwards. You may also use the cooker with an inner opening but it can be a bit difficult for you to use and it can be difficult to stick the aloo paratha. You can also burn your hand, hence caution using a heat glove if you are using a cooker with an inward opening.

The cooker should be heated up at an extreme temperature in order to cook the tandoori aloo paratha. In order to do that keep the cooker, you are using it on the stove at a high flame.

But if you are using an instant pot then pressure cook them for approximately 6 minutes to 7 minutes and then wait for the pressure to get released.

After peeling off the boiled potatoes, mash or grate them until it is a smooth layer. Make sure no hard pieces are left. If hard pieces remain it may tear the aloo paratha when you are flattening them.

This step is the most important as now you are supposed to add the species and salts in proper proportions as it determines the taste of the aloo paratha. After mashing the potato chunks add the ingredients mentioned above for the preparation of the stuffing.

Prepare the whole wheat flour dough with the correct measure of flour and water with a tinge of salt.

To prepare the dough, take 2 cups of India Gate whole wheat flour and half a small teaspoon of salt, one tablespoon of oil, and a half cup of normal or lukewarm water in a large mixing bowl. Mix everything and keep adding small amounts of water whenever required in order to form a non-sticky, soft and fluffy dough. Continue kneading until the dough is soft and fluffy.

Take a small amount of the mashed potato mixture and put it inside a small disc of the whole wheat flour dough and then seal it.

With the help of a rolling pin, flatten the dough in a circular shape with an equal thickness on all sides. We need to keep one thing in mind while flattening the dough, it is to keep the thickness a bit more than normal parathas.

By now it can be assumed that the cooker has heated up. Now put on one side of the paratha a thin coating of water.

Stick the side having the water layer of the paratha on the walls of the cooker. Try keeping the cooker slanted or tilted in order to provide the maximum possible heat of the flame.

You can, if you want, stick more parathas on the other sides of the cooker. But if you do so don’t tilt the cooker.

Slowly you will see that the aloo paratha has started fluffing and you will observe that the sides or the corners will turn into golden brown color. When this happens turn the cooker upside down so that the inside face the flame directly. Don’t forget to take precautionary measures. This will help in cooking the face of the paratha.

Once step 12 is complete take a spatula or a fork to take the Tandoori aloo parathas from the cooker wall.

Enjoy the Tandoori Aloo Paratha with butter or ghee. You can have some side dishes as well like Dal makhani or Yogurt or even just pickles.